This section walks through KijiExpress examples with the assumption that the reader is not familiar with Scala or Scalding. If you are already comfortable with the syntax of Scala and Scalding, you can skip this page.

A typical KijiExpress job includes reading data, manipulating the data structure and perhaps the data itself, then writing the resulting data. Scala and Scalding are already optimized to manage data in pipelines; KijiExpress gives you some additional power by taking advantage of the entity-centric way data is stored in Kiji tables.

After describing some commonly used Scala syntax conventions, we'll describe the components of managing basic data flow through a pipeline with KijiExpress:

The next section will contain more examples of Scalding operations that are more complex than maps, such as grouping and joining operations.

Scala statements cannot include a newline between square brackets.

Note that more than one newline in a row is not allowed in the Express REPL.

In Scala, you set types by following an object by a colon and then the type or trait. A trait, like a class, lets you define object types, but unlike classes, you can't pass arguments to a trait. Because everything is an object in Scala, you’ll see typing in all sort of places. For example, there are two places in this example where types are set explicitly:

The function getMostPopularSong takes songs as its input; the syntax songs: Seq[FlowCell[String]] tells you that the next identifier is the type that this function expects the input songs to be in. In this case, songs is of type Seq[FlowCell[String]], which is a KijiExpress trait that allows you to easily handle data from a cell in a Kiji table. More on this later in Managing Data.

The return type for the function is also explicitly typed: getMostPopularSong(…): String tells you that the return value of this function is of String type.

In explicit function definitions in Scala, the syntax of the definition depends on whether or not the function has a return value.

If the function has a return value, the syntax includes “=”:

In this example, getMostPopularSong returns a value of type String that is generated from the (omitted) statements between curly braces.

If the function does not have a return value (as would be specified by “void” in Java), the syntax omits the “=”:

You’ll also see many places where functions are defined inline in another function call. For example, when performing a map operation, you can define a function that describes the transformation between the map source and target fields:

Data processing occurs in pipelines, where the input and output from each pipeline is a stream of named tuples represented by a data object. Each operation you described in your KijiExpress program, or job, defines the input, output, and processing for a pipe.

When data is read in KijiExpress it is implicitly converted into a KijiPipe, which is an extension of Scalding RichPipe. The data is in the form of a stream of tuples, where one tuple includes a row of the input. The data in each tuple is organized in fields: if the data came from a Kiji table, each tuple contains a field for each column or map family in the table, including the entity ID. If the data comes from the output of a TextLine source, each tuple contains a single field named “line”.

Most Express operations involve reading data from some data source, whether it's a KijiTable or a file. In Scala, reading data can be immediately paired with mapping the data into tuples for data pipeline operations.

A basic statement to read from a text file would use the Scalding type TextLine to handle the I/O operations:

Line-by-line, this statement does the following:

With data streaming in the processing pipeline, the KijiExpress operation can begin to manipulate the data. The most common operation to apply to data is to restructure the arrangement of the data using a map operation. Scala provides more than one map-type operation; we'll go through the four most common here:

Map operations in Scala use the following syntax:

This syntax is simplified: it shows single field mapped one-to-one to another single field. A map function can operation on any number of fields at once, and the mapping doesn't have to be one-to-one.

The output of a map operation on the data stream always augments the input stream: the output is a tuple that includes the entire input stream plus whatever additional target fields are specified.

The keyword map also appears as a constructor for a map datatype. For example, Map appears as a KijiInput parameter, it maps columns from the table into tuples in the output data stream. See KijiSources ?link.

Here are some examples of map functions:

This example takes the line field (output from TextLine) and uses a mapping function parseJson to transform the JSON record into tuple fields.

Notice that the map target includes multiple fields: the parseJson function has to produce these fields as its output.

The map function does not need to indicate the types of the output fields because they are specified in the definition of parseJson:

The anonymous map function augments the input data stream with the new material specified in the target; each "row" of the the output data stream is a tuple that consists of four fields: line, userId, playTime, and songId.

Inserting a value as an Entity ID

This example takes the values of one field, transforms them by applying the mapping function, then puts the result in another field.

This example has the following points:

A map statement can include the transformation in line instead of specifying a function defined elsewhere. This example takes a column from a Kiji table and returns only the most recent value of the column. It uses the fact that the content of the column can be manipulated as a Seq[FlowCell[...]]: Kiji tables can hold many timestamped values (versions) for each column; data is returned in a Seq[FlowCell[...]]. We can access the first element of a Seq with seq.head, and we can access the datum contained in a FlowCell with flowCell.datum.

This example has the same basic structure as previous examples:

Just like a map operation, you can specify multiple existing or additional fields and the mapping function can be defined in-line or elsewhere in the file or in an included library.

The flatMap operation performs the map to generate a list of new values to fill the additional fields, then flattens that list into individual tuples. For each tuple of input, the flatMap generates a tuple for each value produced by the mapping function. Each output tuple includes the entire input tuple plus the additional field value. Here are some examples of flatMap functions:

The quintessential use of flatMap makes an index of values such as turning a document into a list of words. The flapMap statement takes a string, splits it into "words" delimited by spaces, and then produces a tuple for each word is as follows:

As with a map operation, the flatMap operation has the following characteristics:

FlatMap With Multiple Fields in the Output

The Document to Words example is simple in that it pivots on a single field value; what happens when there's more payload in the output?

The interesting pieces of this statement are:

The mapping function bigram turns playlist into a collection of tuples: 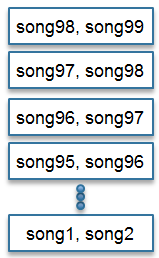 The output of the flatMap is a tuple for each value of the collection of first song and its ID; the tuple includes the original playlist values: ?how do the song IDs come back?

The details of how to define the mapping function to generate bigrams is described in ?tutorial_link?

MapTo operations perform a map operation followed by a "project" operation; using a mapTo function is more efficient that performing the two operations separately. The project operation drops the original input fields and retains only the fields indicated in the map operation target field list.

After this oepration, the only fields of the tuples in the pipe are those in output_field_list.

FlatMapTo is similar to MapTo: it performs a flatMap, but keeps only the output fields. This snippet comes from the PlayCounter in the KijiExpress music tutorial:

After this step in the flow, the only field in the pipe is 'song.

In the next section, you will see examples of other Scalding operations that alter the structure of data, instead of simply being transformative maps on a pipe. These include grouping and joining operations.

There are a number of examples provided in the KijiExpress tutorial. The following list indexes some of the functionality shown in the tutorial examples with the specific example file:

These Scala files are here: